Survey of Reach and Market Shares 2021

Table of contents 2021 survey of reach
and market shares

A PDF-Version of the 2021 market report as well as an overall Excel-list of the survey result can be downloaded here.

Art. 65 of the Audiovisual Media Services Act (AMD-G) requires a survey of the reach (market shares), coverage levels and user and viewer figures, as necessary for enforcing the provisions of the AMD-G in the context of legal supervision.

Based on these provisions, market research was carried out in 2022 for the 2021 calendar year, just as had been the case the previous year for the 2020 calendar year. As part of the survey, all providers were queried about reach (market shares), coverage levels and user and viewer numbers.

The data queried pursuant to Art. 65 AMD-G can be divided into three areas:

For television channels, the daily reach and the market share were queried in the 12+ target group for Mondays to Sundays. The diagrams provided display the reported information as a bar chart divided into ranges. The data include television channels with nationwide as well as local and regional coverage, while the specified reach and market shares refer to the particular television broadcaster’s coverage area. As such, the data are comparable only to a limited extent. 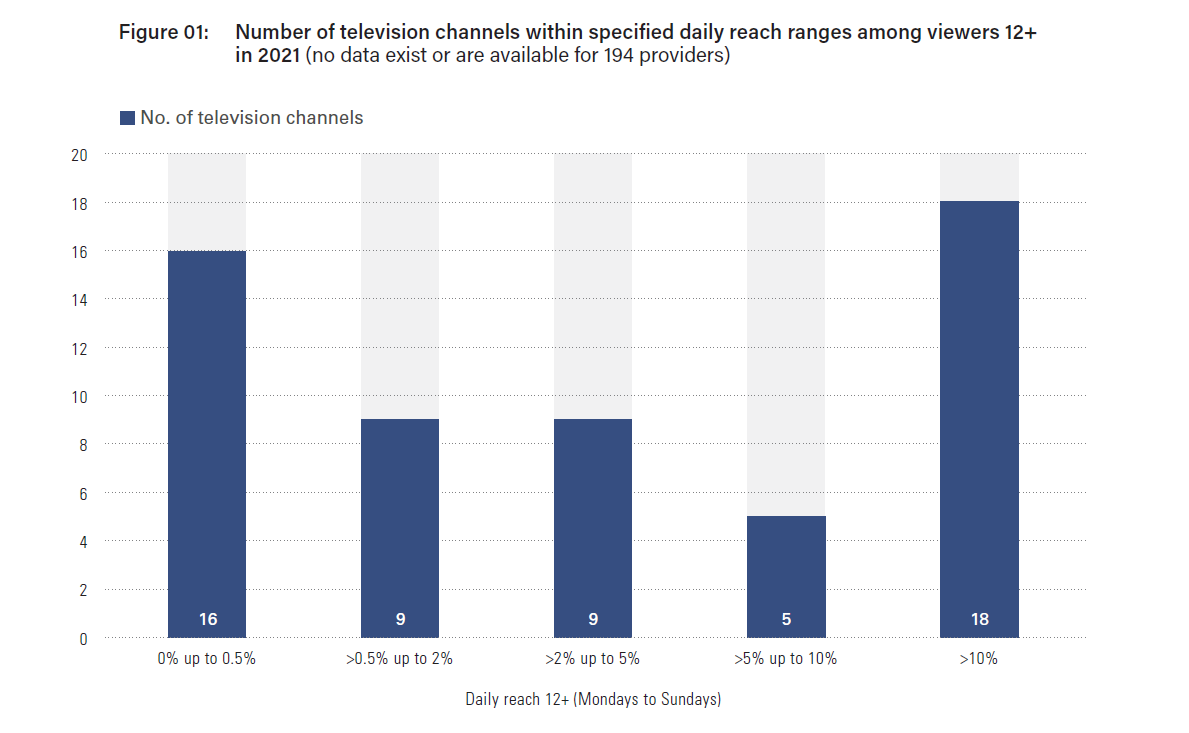 Compared with the chart above, the number of television channels in relation to daily reach among the 12+ target group (Monday to Sunday) in 2020 is as follows: 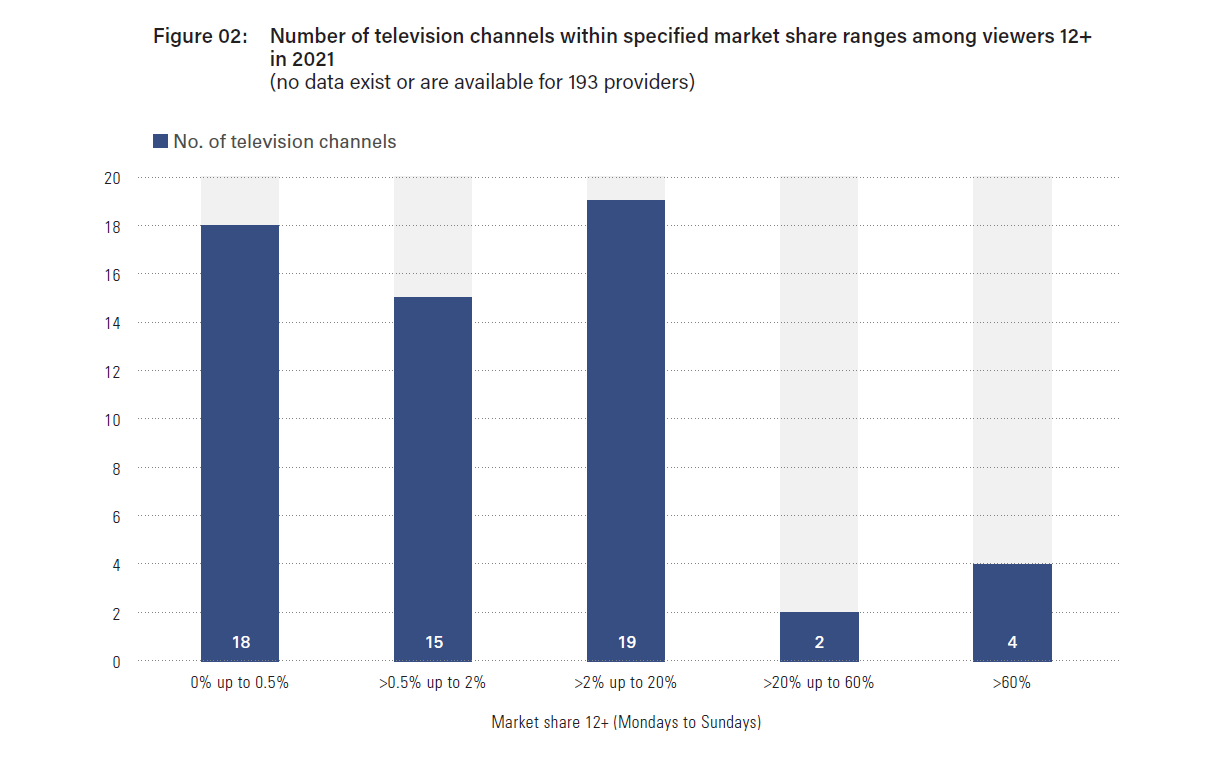 Compared with the chart above, the number of television channels in relation to market share among the 12+ target group (Monday to Sunday) in 2020 is as follows:

In the area of on-demand services/non-linear audiovisual media services, the questions focused on the number of users (subscribers or individual customers) and service requests. As above for television channels, the figures that are reported here are also divided into ranges and displayed as a bar chart. 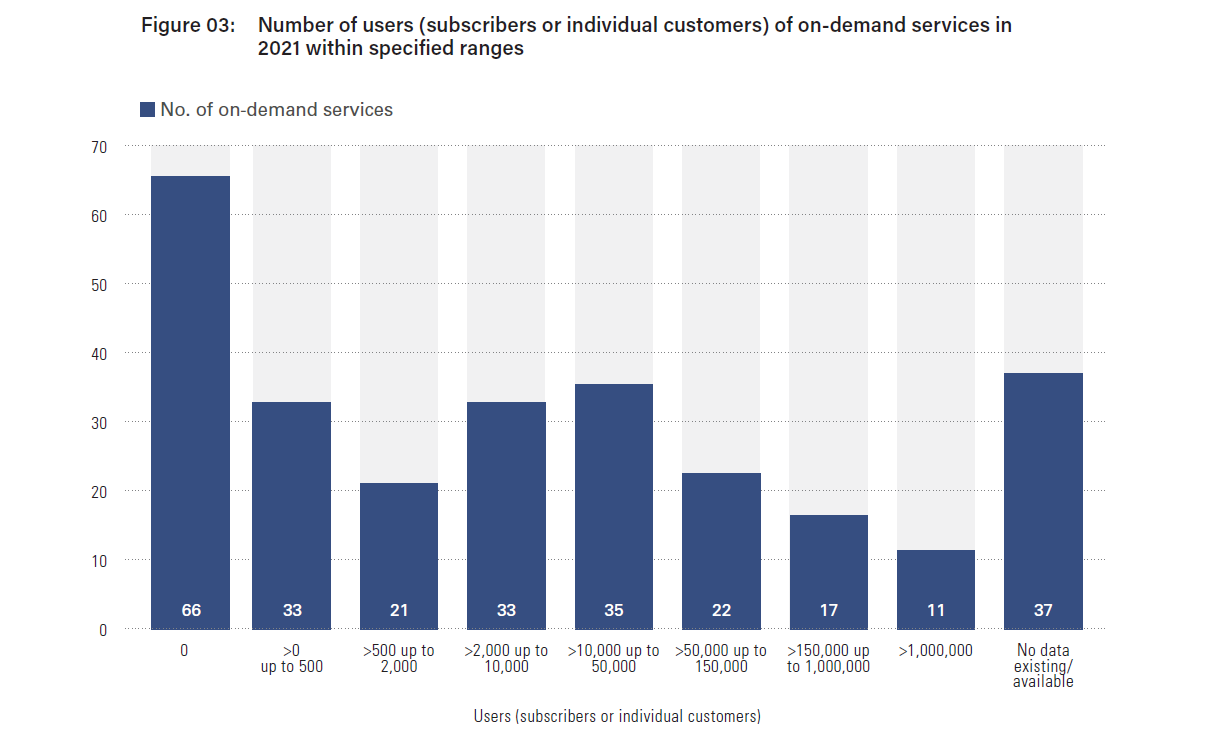 Compared with the chart above, the number of subscribers in 2020 is as follows: 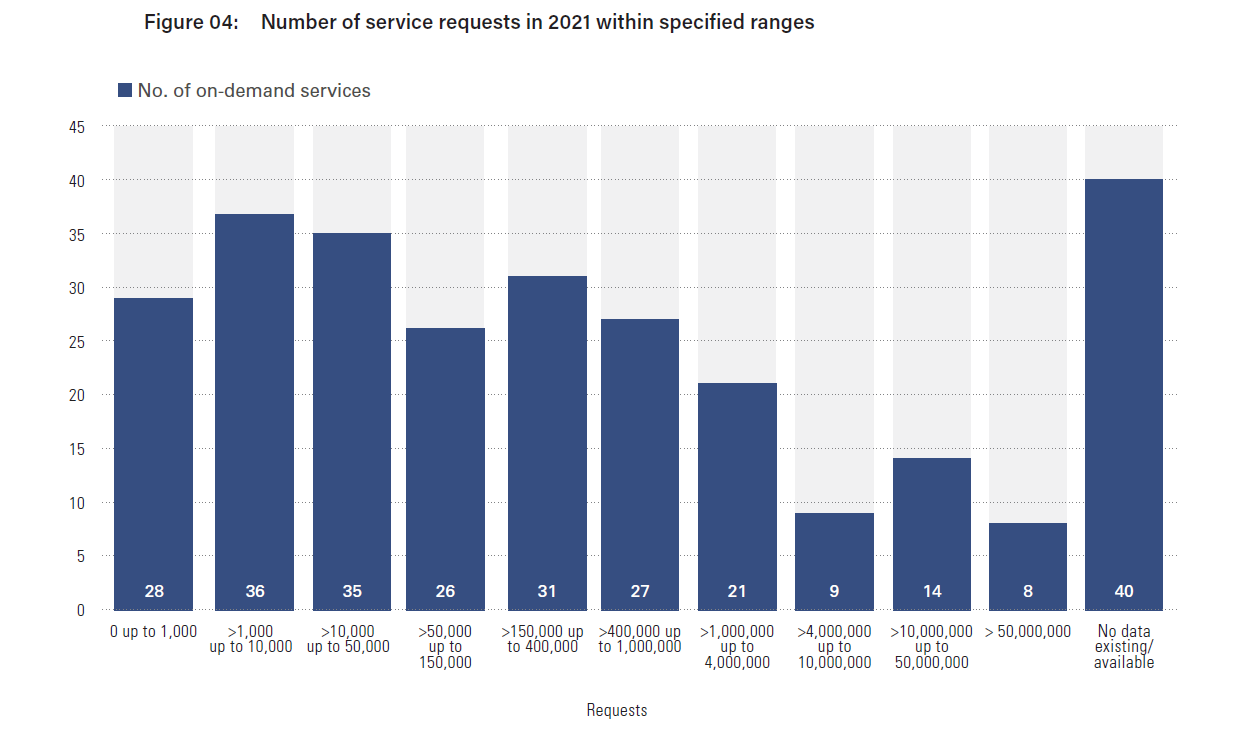 Compared with the chart above, the number of requests in 2020 is as follows:

Daily reach and market shares were queried in the radio station category; for the bar chart presented, the daily
reach and market shares were specifically queried among the 10+ target group for Mondays to Sundays. Again,
the information is presented here as a diagram in which the reported data are broken down into ranges. The
data include radio stations with nationwide as well as local and regional coverage, while the specified reach
and market share refer to the particular radio broadcaster’s coverage area. 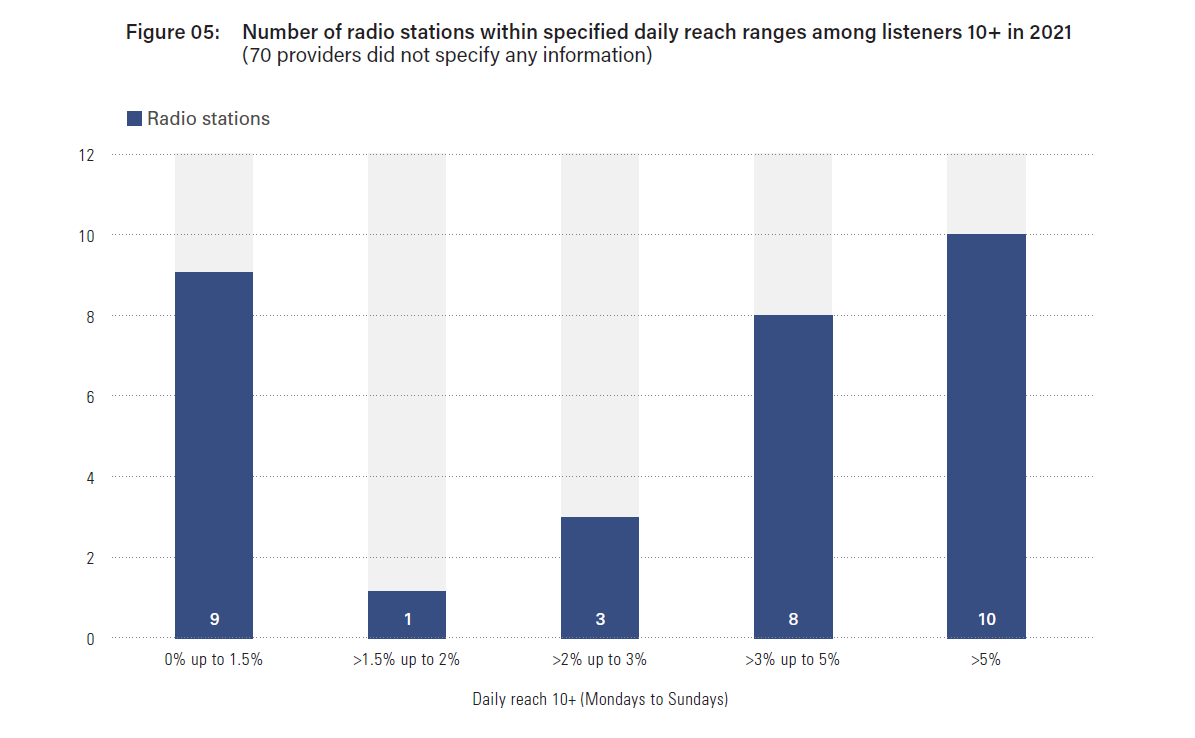 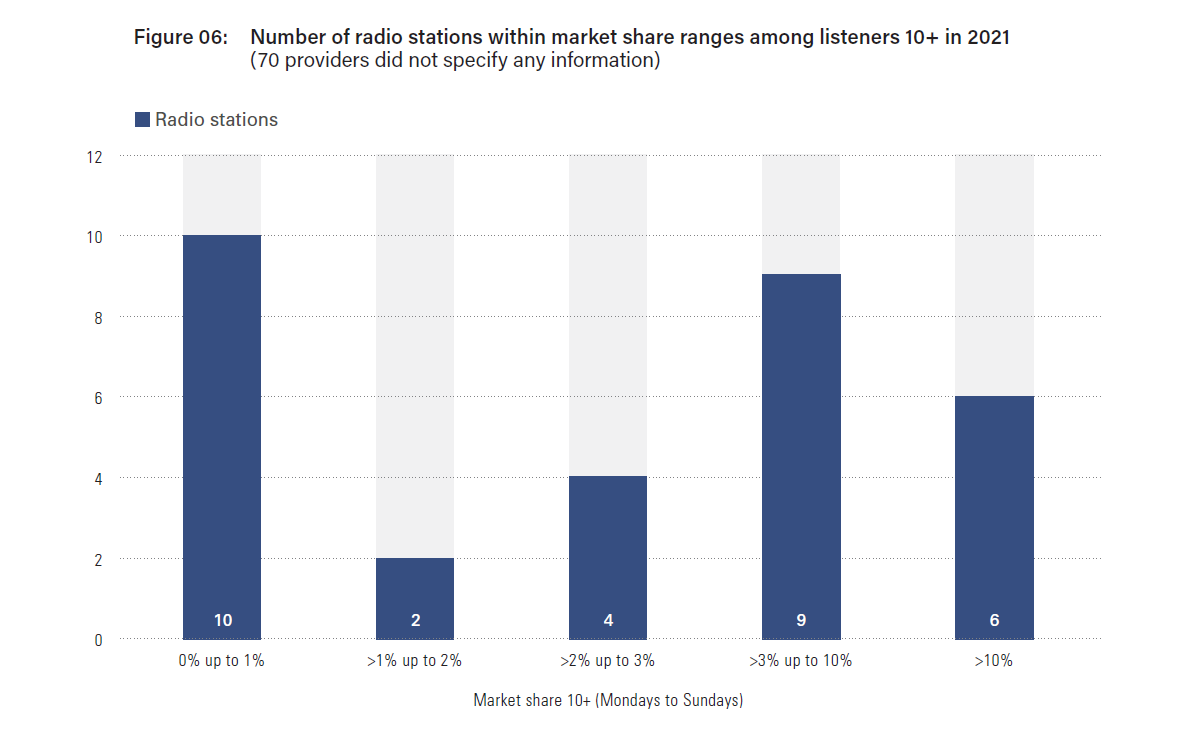 The number of subscriptions was queried for cable networks. Again, the relevant figures were divided into ranges, with the bar chart included below created on this basis. 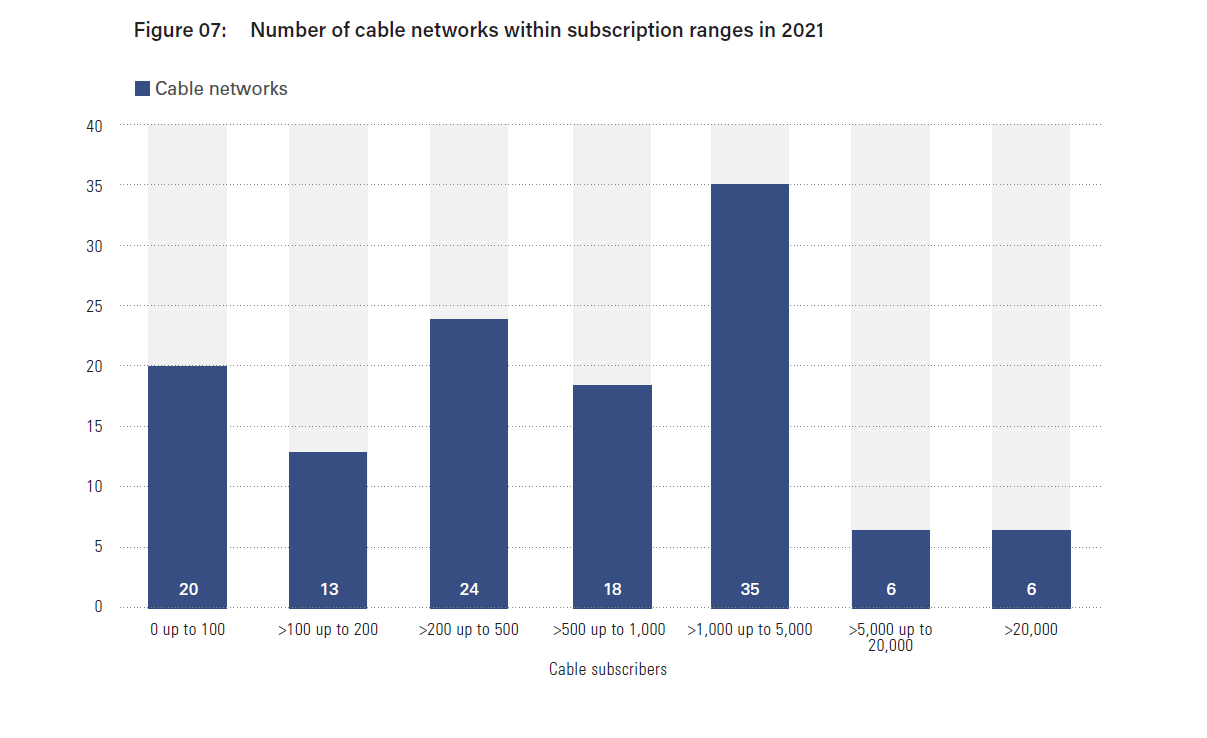 In addition, survey results were singled out from the various areas and used as examples which are presented for the whole of 2021. Note that the information presented here is based on the figures provided directly by the service providers. 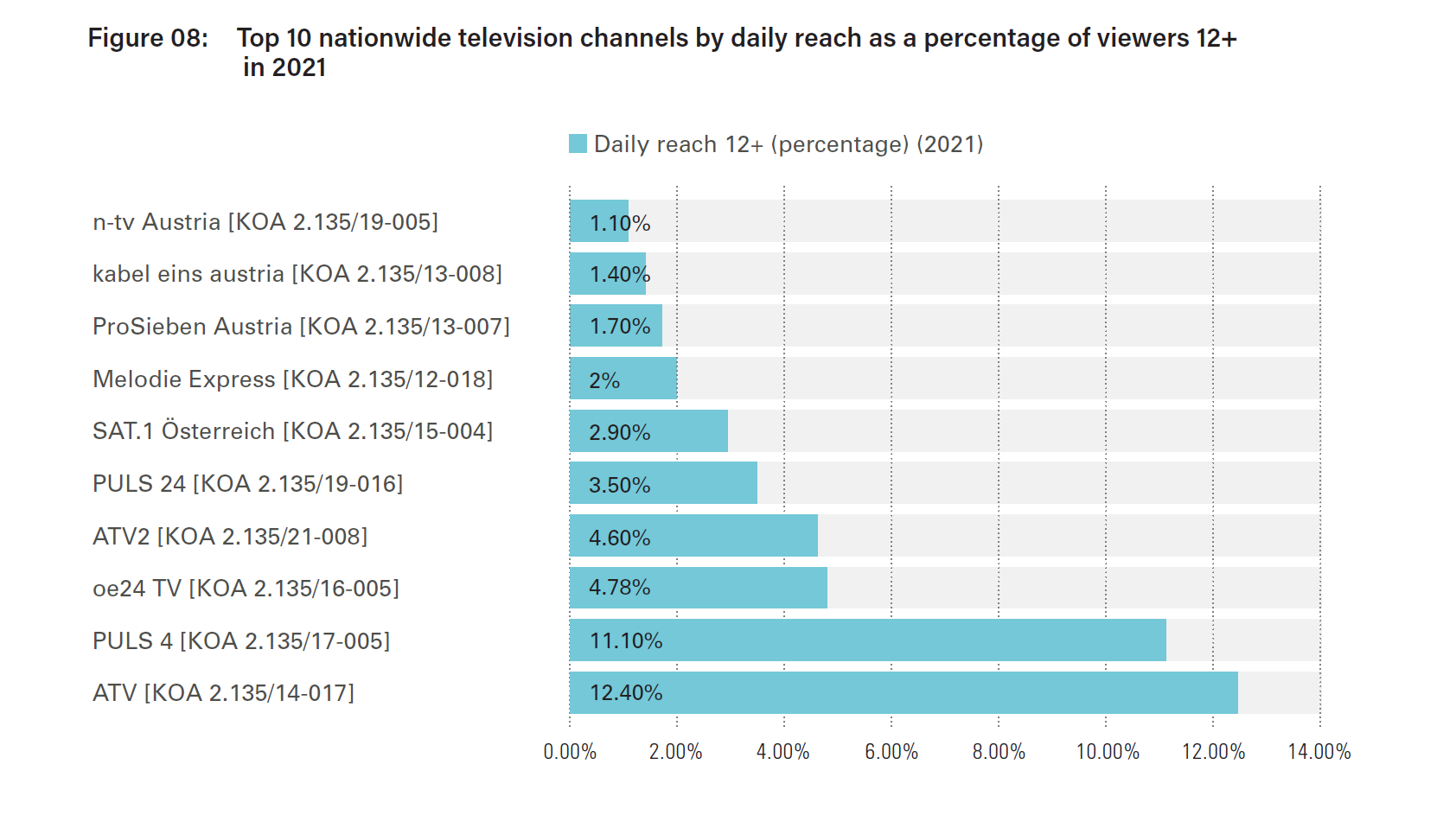 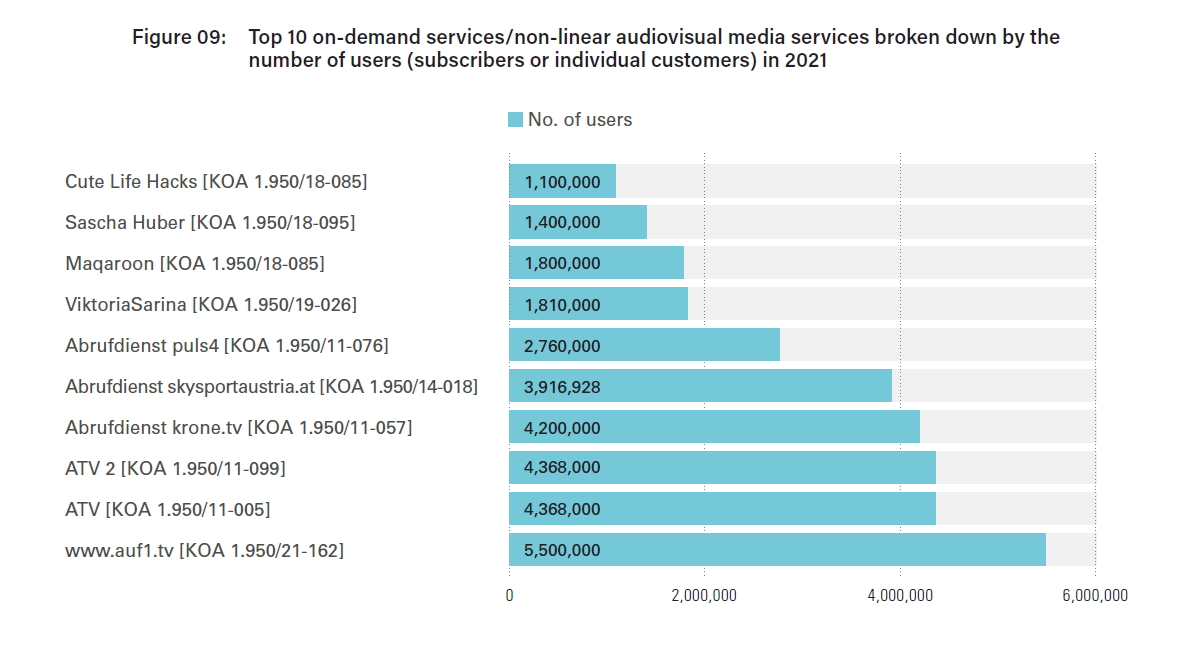 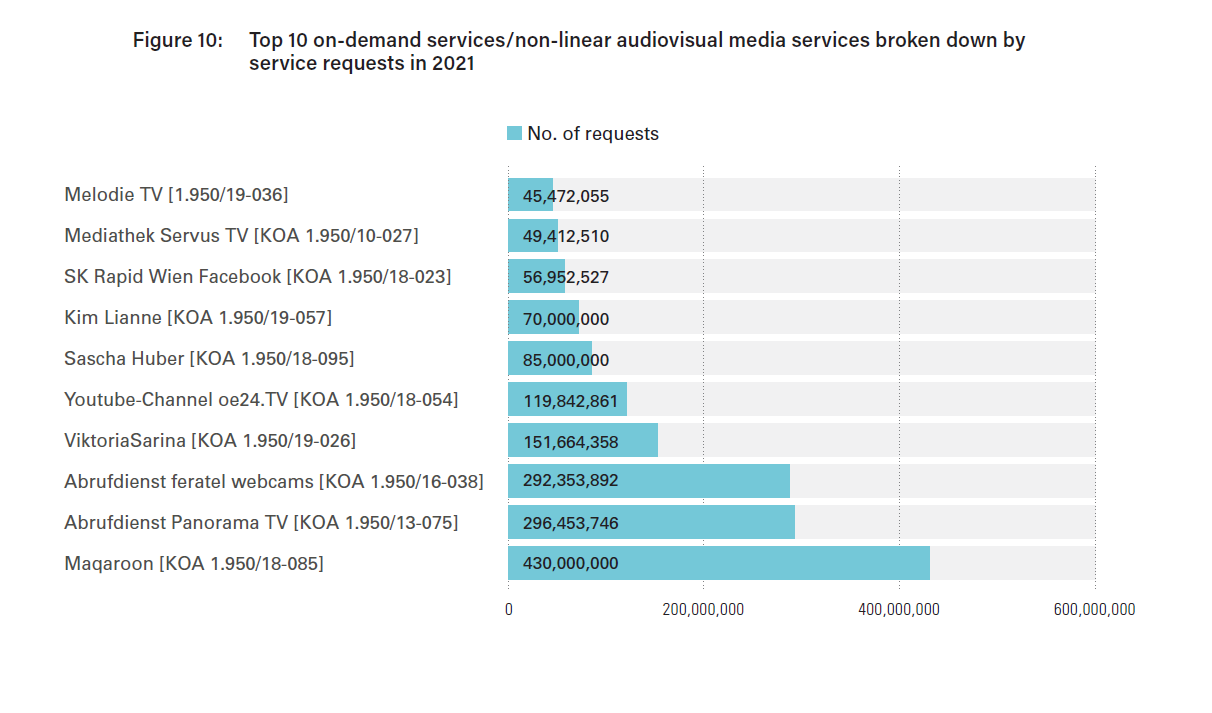 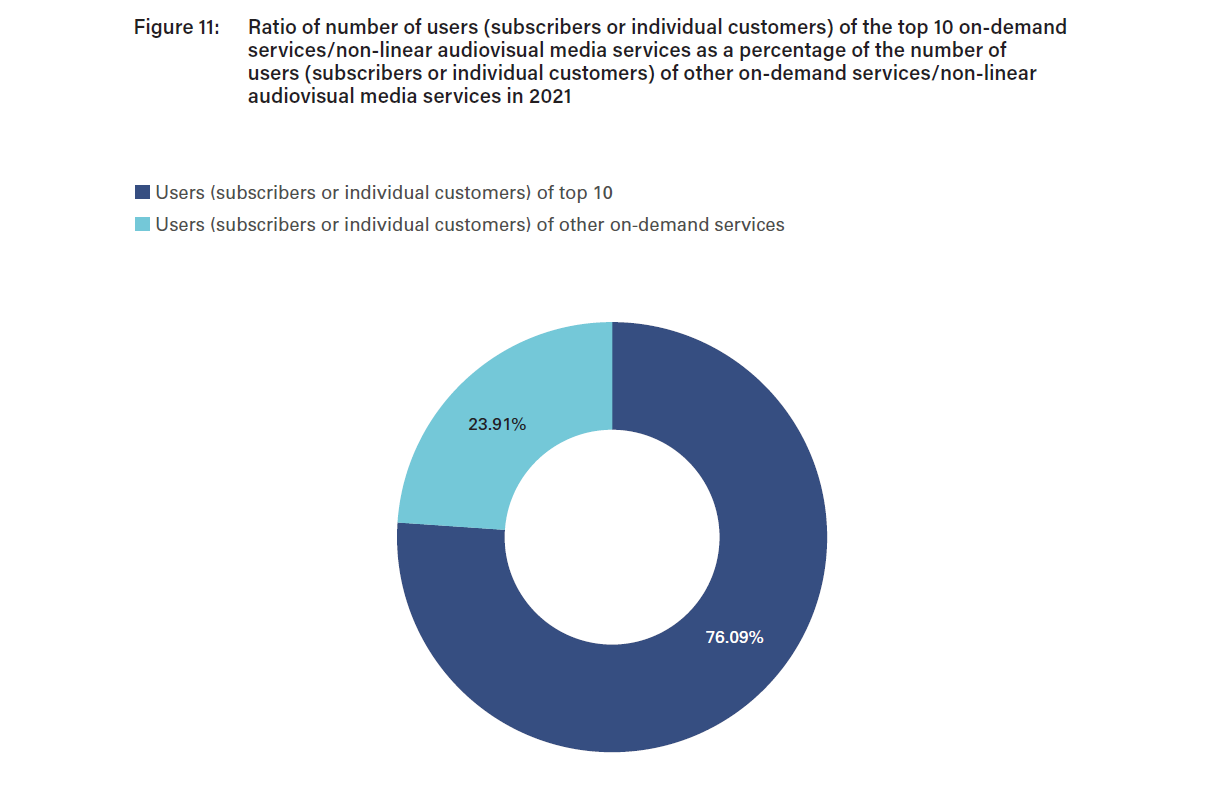 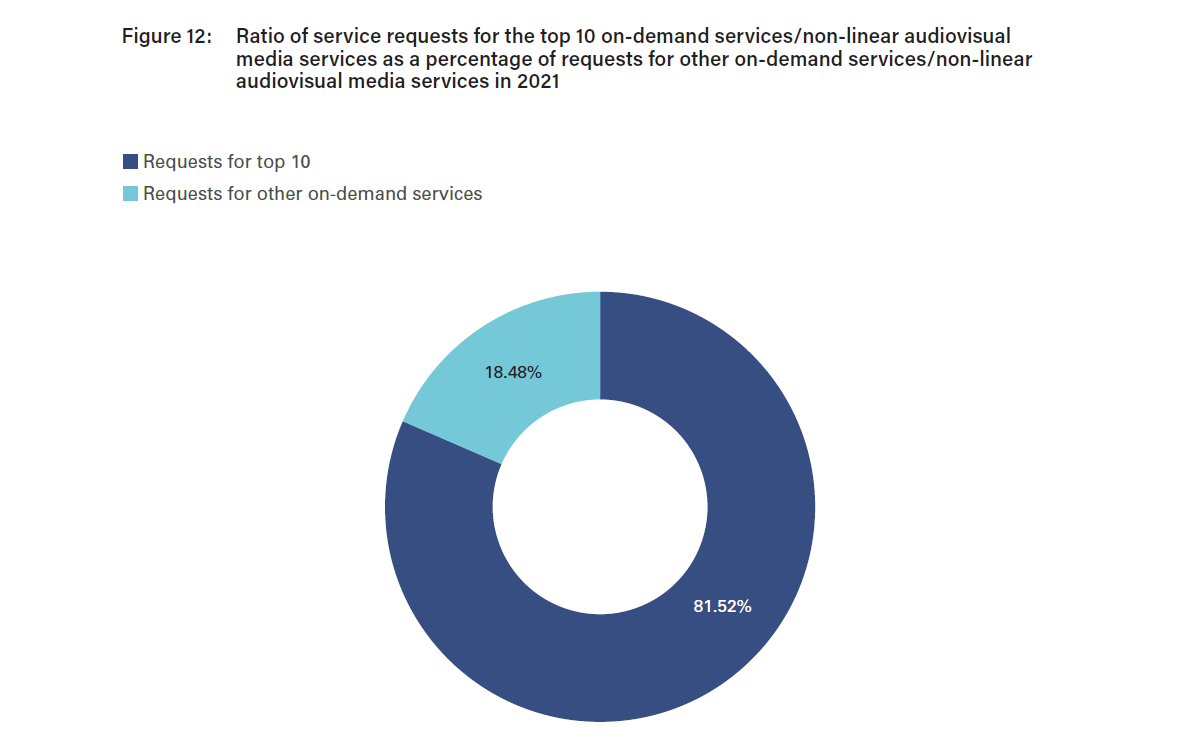 Link to the overall survey results

All survey results for the areas of television and on-demand services/non-linear audiovisual media services are available on the RTR website at https://www.rtr.at/Reichweiten-undMarktanteilserhebung2021 (in German).

The following information is listed:

It must again be noted that the figures presented are based on information directly provided by the service providers, while the data relating to reach and market shares in particular refer to the particular service provider’s coverage area.

We would like to keep you up to date